Do you know Ballpoint Pens

If you are looking for a reliable supplier of Ballpoint Pens, you need to know a few things first. Ballpoint pens are manufactured from a range of materials. Ink is an important component and should be of high quality. Ink manufacturers use a variety of additives, ranging from polymers to catalysts. Then, the pen's body is assembled. The finished pens are packaged in various ways, depending on where they will be sold. Single pens can be packed in blister packages with a cardboard backing, while groups of pens are bundled together in boxes or bags. Lastly, the sales units are stacked on pallets, shipped to distributors, and finally sold to consumers.

The Ballpoint pen's development is a complex process. Several different inventors tried and failed to develop the perfect pen, but the Biro brothers finally found a solution. In the 1930s, it took more than just putting a pen to paper to develop the ballpoint. The original ballpoint pen contained a steel ball, but later versions used a tungsten carbide ball. This material is much harder than steel, making them more durable.

Eventually, many different manufacturers developed ballpoint pens, including a company from Argentina. Initially, Biro Pens were known as "Biromes," a combination of the word Biro and Meyne. The Argentines still refer to their pens as Biromes. The British Royal Air Force ordered 30,000 Biro pens during World War II and later, this company became a success. The British Royal Air Force had no problems with the ink because it dried almost immediately.

China is the largest ballpoint pen producer in the world, but the country has struggled to manufacture a pen tip without the aid of foreign imports. The biggest stainless steel manufacturer in the country, Taiyuan Iron and Steel, has been working to develop a ballpoint pen tip for five years. Stainless steel is a crucial component for making ballpoint pens, and the company has spent millions of dollars to invest in precision equipment and high-grade steel.

Metal components are made while ink is being mixed. Tungsten carbide balls are sourced from outside vendors, but the rest of the pen's parts are manufactured using different molds. During the production process, bands of brass are automatically inserted into stamping machines, which cut thousands of small discs. These are then placed into a compression chamber, where a steel ram presses the metal until the metal is forced into a die cast mold.

In order to ensure that each pen is of the highest quality, manufacturers undergo extensive testing processes. Each batch is sampled and tested in a Quality Control lab. Chemical and physical properties are monitored to ensure consistency. Adding dyes and other components can correct any batches that are "out of spec." 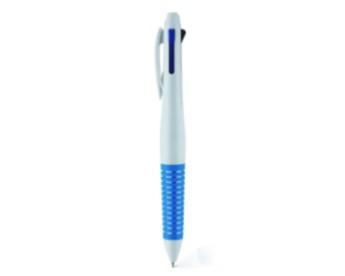